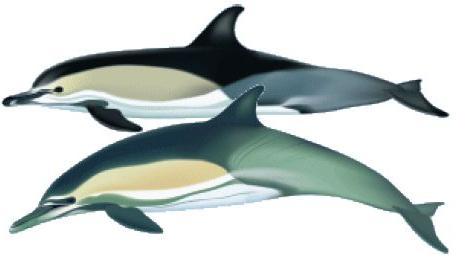 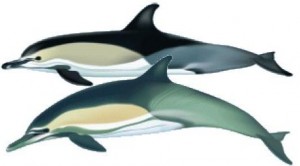 The common dolphin throughout history has often been recorded in art and literature. It was recently proposed that two forms of this species, the short- and long-beaked common dolphin, represent two distinct species.

COLOR
Color patterns on the common dolphin are the most elaborate of any cetacean. The back is dark gray-to-black from the top of the head to the tail dipping to a V on the sides below the dorsal fin. The flanks are light gray behind the dorsal fin and yellowish-tan forward of the dorsal fin, forming an hourglass pattern. Its belly is white. There are large dark circles around the eyes connected by a dark line that runs across the head behind the beak and a black stripe runs from the jaw to the flippers. 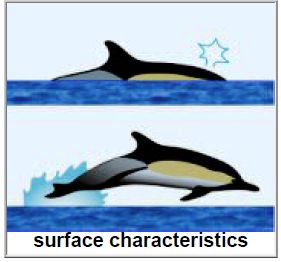 FINS AND FLUKES
The dorsal fin is triangular-to-falcate (curved). It is pointed and located near the middle of the back and is black-to-light gray in color with a black border. The flippers are long and thin and slightly curved or pointed depending on geographical location. Flukes are thin and pointed at the tips with a slight notch in the center.

FEEDING
The common dolphin feeds on squid and small schooling fish. In some parts of the world, common dolphins
feed at night on the deep scattering layer, which moves towards the water’s surface during that time. Common dolphins have been seen working together to herd fish into tight balls. Like many other dolphin species, the common dolphin will sometimes take advantage of human fishing activities (such as trawling), feeding on fish escaping from the nets or discarded by the fishermen. 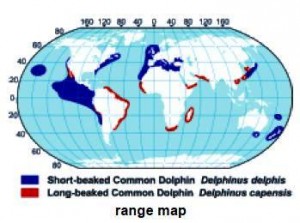 NATURAL HISTORY
Common dolphins are often found in large herds of hundreds or even thousands. They are extremely active, fast moving, and engage in spectacular aerial behavior. They are noted for riding bow and stern waves of boats, often changing course to bow ride the pressure waves of fast-moving vessels and even large whales. Common dolphins can be frequently seen in association with other marine mammal species.

STATUS
Traditionally, hundreds of thousands of common dolphins have been taken incidentally, along with spinner and pantropical spotted dolphins, in purse seine nets used during tuna fishing operations in the eastern tropical Pacific although these numbers may be improving. Common dolphins also may be caught accidentally in other fishing gear, such as midwater trawls. Turkish and Russian fishermen used to catch large numbers of common dolphins in the Black Sea for meat (to be used for fish meal) and oil. The fishery stopped after the common dolphin numbers became severely depleted (and still is); there are several reports suggesting that the Turkish fishery may have resumed. Many common dolphins are taken in a Japanese small cetacean fishery and directly caught in the Mediterranean. Some common dolphins may be taken in Peru for human consumption.